Why Your Children Should Read Harry Potter: The Valuable Lessons Of An Incredible Series

Now that that is taken care of it's time to get to the post...

Teamwork
Harry, Hermione, Ron, Fred, and George were just a few of the many characters who showed us true teamwork. In my mind, Fred and George are the ultimate team. They work together on everything and they show us that two can be a whole lot better than one. Also in Harry Potter and the Sorcerer's Stone, the famous trio (Harry, Hermione, and Ron) need the strengths and expertise of each of them to keep going. They have to cooperate and work together to stay alive. They have to trust each person to lead them in the right direction and to keep them safe. In the final book there is a battle at Hogwarts and it takes everyone working together to defeat Voldemort and the Death Eaters. The "good guys" work together and come out victorious while the Death Eaters don't because while they are working for one cause they don't cooperate very well. They are constantly struggling for power and when it comes down to it they are not at all willing to make sacrifices for one another. So not only does the series show us the qualities of a good team but it shows us what will make a team fail in the end. For a large part of my life I have been one to always try to do everything on my own, but Harry Potter and his friends taught me that you cannot master everything and sometimes you need someone with a different skill than you to do something. For more about HP and teamwork, read this.

Judging Others
When I think about the series and the topic of judgement I jump right to Harry and Snape. Harry made judgments about Snape throughout the entire series and yet in the end we learn that all we thought about Snape was completely false. Snape was a hero in many ways but we don't understand this until he is dying. Snape is not really how we viewed him for most of the series. I think many of us can learn from this because I think all of us do what Harry did. We make judgments about someone and later learn something about them that completely changes how we view them. This one truth will stick with me forever mainly because of Harry Potter: things are not always as they seem. This is clearly illustrated by the photo on the left. Harry was ridiculously wrong on all of those assumptions yet he still kept making them. We look at Harry and say 'get it together'. Then we often go and make our own wrong assumptions about others.

Lightness and Goodness
In many books and movies we are told or shown who is "good" and who is "bad". I think the Harry Potter series does an excellent job at showing us that people are very complex and cannot be accurately described as good or bad. Sirius Black once told Harry, "the world isn't split into good people and Death Eaters. We've all got both light and dark inside us. What matters is the part we choose to act on. That's who we really are." In Harry Potter and the Goblet of Fire, Dumbledore says that we must choose between what is right and what is easy. I think that this ties into choosing what side of us we will act on. What is easy is often not what is good. It is often much harder to do the right thing, which is why we make so many mistakes in life. Another wise quote from Dumbledore relates to the topic of lightness and darkness is this one: "Happiness can be found even in the darkest of times, when one only remembers to turn on the light." The series teaches us to act on what is good and right. 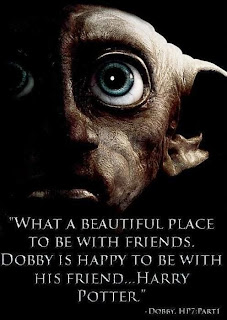 Those who know me know I am not really a crier. I don't tend to cry at movies or songs or even books. It's rare for me. But nothing makes me want to cry more than Dobby's final words. "What a beautiful place to be with friends. Dobby is happy to be with his friend...Harry Potter." Dobby is probably the most loyal friend one could ever have. He shows us what a true friend is and in the end, he dies saving his friends. Dobby is not the only character that shows us the true value of friendship and loyalty. Hermione put a lot of emphasis on doing well in school but she always showed us that friendship comes first. In the very first book Hermione said this: "Books! And cleverness! There are more important things -- friendship and bravery." The Harry Potter series made me (and probably many others) want to have friends like Harry, Ron, and Hermione so in many ways the series encourages to make new friends and keep them central in our lives. 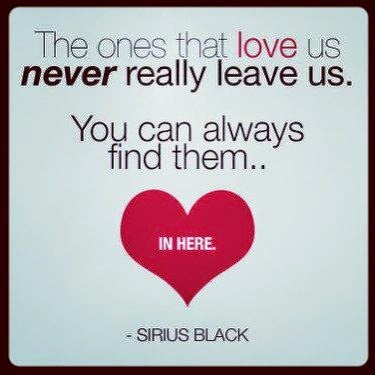 Love
Harry Potter proves that love is the closest thing we have to magic. Nothing can stop it. Lily's love protected Harry even after she died. Hermione, Ron, and Harry took risks for one another out of love. Dobby risked his life for the trio out of love. Snape protected Harry out of love for Lily. Love is shown by so many characters throughout the series it would be impossible to list them all. Many characters show love for others to their deaths. The series does make this clear though: the ones that love us never really leave us. The series helps us cope. It shows us how to move on but it also shows us to treasure the love we are shown and also, to show love back.

Life can be incredibly hard. The HP series does not shy away from conflict or death. It embraces them head on. There are over 20 major deaths in the series. Harry grows up as an orphan living with his unloving and uncaring relatives. Snape loses the love of his life to the man who bullied him in school. Tonks and Remus died just when their lives together were beginning and Teddy grew up an orphan. Arthur and Molly Weasley lose a son. Hogwarts loses Dumbledore. Harry loses Sirius, the one family member not lost to him already. Neville's parents lose their sanity. There is so much reality in this series about a fictional world. The Harry Potter series teaches us that life isn't fair, people we love will die, and things will never be happily ever after. But that doesn't mean life isn't a wonderful thing.

Other Good Lessons
A. Our words have power - “Words are our most inexhaustible source of magic, capable of both inflicting injury and remedying it.”
B. Live in the present - “It does not do to dwell on dreams, Harry, and forget to live.”
C. We are the same in many ways - "Though we may come from different countries and speak in different tongues, our hearts beat as one"
D. Watch how someone treats their inferiors - "If you want to know what a man's like, take a good look at how he treats his inferiors, not his equals."
E. Living without love is more pitiful than death - “Do not pity the dead, Harry. Pity the living, and, above all those who live without love.”

The Harry Potter series is seen by many as simply a series about witchcraft and wizardry but it is not just that. It is a series that promotes teamwork, shows the importance of not judging others, tells us that there is no such thing as good people and bad people, gives us a picture of true friendship and loyalty, demonstrates the importance of love, and gives us a realistic perspective on life. If you haven't read the series, then do yourself a favor and read it. You won't regret it.
Posted by Unknown at 6:24 PM