Belief in the Bywater: A Story Of How God Is At Work In New Orleans, LA


Abuse. Neglect. Drugs. Sex. Jail. Teen pregnancy. Gangs. Violence. Death. All of these things are much too familiar for the kids of the Bywater community. Grace Baptist Church knows this and that is why they lead a Bible club for two full months every summer. At Bible club kids can come eat two good meals, do fun art projects, play outside with the other kids, do cool literacy skill building activities, worship the Lord with upbeat songs, and hear great Bible stories in a safe environment filled with people who care deeply for them. Grace’s Bible club is transforming the lives of those in the community one child at a time. That is why Kaleo has partnered with the church for years and sent many missions teams their way to help lead the Bible club.

I got the opportunity to lead a team of students there in early July and I was shocked at what I found. I met a sweet eight year old who had to find meals for himself and his siblings or risk not getting to eat. That same kid showed up to Bible club with a bash on his eye and he would not tell us how he got it. I met a kid whose mom had committed murder. That same 10 year old had a condom. I met a 13 year old girl who assumed that she wouldn’t get married but instead wind up in jail. I met a young boy who had seen his mother hit and killed by a truck, his cousin gunned down in front of him, and his father leave him. When we asked the kids what Jesus had done for them, he answered “Jesus has helped me not to get shot in the back of the head”. Several years ago that was exactly what happened to a kid in front of the church. Two kids fought at Bible club and the next day one of the kids’ uncle came & shot the other child in the back of the head. These kids have seen and gone through more in their dozen or so years of life than most of us ever have or will in our entire lives.

It is heartbreaking when you sit with this but the thing about the darkness is that the light shines brightest in it. The Lord is indeed the only true light and He is present in the Bywater community & He most definitely acts through the people of Grace Baptist Church. It is in this church that these kids can experience the love of God which flows through all of His followers. The thing about these kids is that for most of them no one is forcing them to come. A lot of them come of their accord. They could do anything with their summer but they come to Bible club week after week, summer after summer because they seek love and they find it at Bible club. And they don’t just find some love, they find a lot of it in us and they find the ultimate author of love at the same time. These kids learn about the God who created them and loves them, and it is so beautiful to see. One day I was sitting with an eight year old girl who had been causing some trouble before Bible Time. I was worried she would make a scene and ruin Bible Time for the other kids. That was the only reason I had the conversation I did with her. As soon as we all sat down for the skit of the day, I asked her if she was ready for the Bible story. She said “this is my favorite part”. I was taken aback a bit (based on her performance earlier in the day). I said “really?” and she said “yes!” I asked her what her favorite Bible story was and she began to tell me the story of David and Goliath. Immediately I thought “oh no, this girl likes this story because of the fighting in it”. But then she surprised me again. She said “the little guy won, and he won because he loved Jesus & Jesus was with him”. I was so impressed. That little girl sat through that entire Bible skit on the edge of her seat. She jumped at the chance to answer a question about the skit and when she did, she explained it all probably even better than I could have. This little girl was truly learning and understanding the Bible and its central message. I am excited for this knowledge reach her heart even more deeply and change her life & the lives of those around her. This message reached the heart of one young man the first day I went to Bible club. He accepted Jesus Christ as his Lord and Savior the very day us Kaleo interns visited. 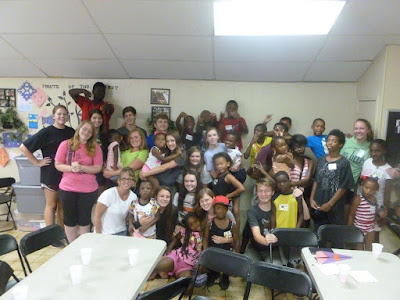 I can’t wait to hear about how Grace’s Bible club continues to impact kids for eternity. I fully anticipate dancing with those kids again in heaven and I am so excited about that. I am changed because of the kids I met and I know our missions team were forever impacted by them too. I am so glad Kaleo Missions partners with existing churches and organizations (such as Grace Baptist Church) that make a difference in their communities year round. Praise the Lord for how He works and how He invites us to be a part of it all!
Posted by Unknown at 7:25 PM No comments: